A Time For Choosing (Angry Hourglass) 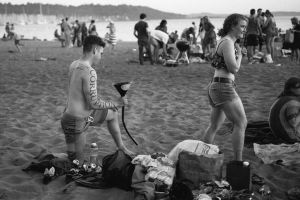 Photo courtesy of Ashwin Rao (via The Angry Hourglass)

A Time For Choosing

You fetch up onshore, drenched, coughing the vestiges of the river’s bitterness from your oesophagus onto the jagged rocks beneath your knees.  Their sharp edges are intimately acquainted with your skin.  Further into the dark maw before you, you hear Hynos’ drowsy murmurings.  “Not this time,” you say.  Turning your left wrist, you see the raw tally marks – a cluster of raised red five-bar gates across its breadth.  You run a finger over the start of the next underneath - the beginnings of a run along the length.

“Here,” a voice says, thrusting a small token into your outstretched hand.  You look towards the object gripped in your fist.  Your benefactor is nowhere to be seen when your head turns again.  You gaze instead into the pitch of the cave, from which audible rumbles echo intermittently.

Walking forward, you begin to pick your path over the prone bodies, their oblivious snoring, towards the assembled Brothers and Sisters lined waiting before the entrance’s black mouth.  You nod to each in turn.

“Choose,” Lethe says, proffering two vessels, one already full to the brim.  The other she bends to fill from the waters running freely to her side.  Drops spill over the sides as she raises it, meeting your eyes; waiting.  Your head turns, seeing the soul to your right, who slurps greedily from an identical cup, head thrust back to down its contents in swift gulps.  A few seconds later he slumps and swoons.  The Androktasiai carry him towards the other sleepers, all shoulders and ankles.  “As ever,” one murmurs, with a sharp toothed grin, eyes glinting.

You point at one of the cups.
“You’re ready?” Atë asks.

You shrug.  “I want to remember.”  You grasp the receptacle firmly, draining its contents.  The splutters begin shortly after, though you keep the liquid down after gagging.

Your heart jumps as you feel the pressure building beneath your skull.  You feel your mouth open without volition.  Somewhere, a cry sounds.  Someone is screaming.  Someone doesn’t stop.