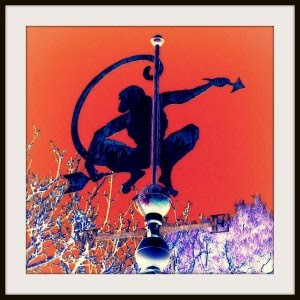 Photo Source by The Shakes (via The Angry Hourglass)

They had always fascinated Jenna with their wizened expressions, gaping jaws and stone moulded grotesque.  She wondered what the hunky punks and chimera would tell her, if able to speak.  What they had seen over the days, years, centuries.  She always looked upwards to them, passing, to and from work.  Sure there were more to be found in hidden nooks and crannies, secretly safe from prying eyes and the bustle of human society, working their weird form of apotropaism.  The world of rictualism around the corner; just out of sight.

Jenna tried to count them, once, twice; many times.  Found herself losing count, having to start over, distracted by their short, squatting haunches.  She told herself it didn’t matter; she would try again, another time; it was her own fault for searching at dusk, a time between times.  So she said the first time – and the second.  The third.  By the fourth, when she failed to reach her count, she had started to think differently; to see a knowing slant in the smiles carved into the rock, their open maws.

Stubborn ever, Jenna renewed her energies; searched anew.  Discovered a different problem.  Her twilight wandering seemed to bring her into contact with new carvings; ones she had not seen before.  She thought not, anyway.  She had tried to tread new paths, mark routes on maps, including the location of each figure, though when she came to seek the papers, they were not where she thought she had left them.  At least, they didn’t seem to be.  She had looked all over.  That made it difficult to remember precisely where they were, how they had been positioned.  Still, she was almost positive she would have remembered the simian acrobat, perched atop the streetlight, arrows in hand, pointing eastwards.  Jenna shivered, glad the arrows weren’t pointing in her direction.  Time to call it a night; for one evening, at least.  There was always tomorrow.

The following evening brought Jenna up short, before she set off en route.  Face to face with granite gazes over her house lintel, just beyond the doorstep.  She had thought to find them. Now they had found her.

This is up at The Angry Hourglass for the weekly Flash Frenzy competition - entries are based on a photo prompt and can be up to 360 words in length.  This one stemmed from the fact that I wanted to write a gargoyle story (ish!)