On The Run (Angry Hourglass) 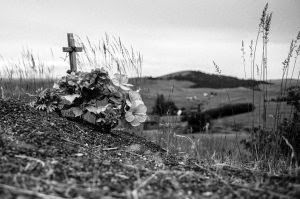 
It had started with the dreams.  Now Maddie was trekking in the midday sun, backpack creating sticky patches between her shoulders, clasping Phil’s hand, as his feet dragged in the dirt.  Helen was ahead with Kat, Seb piggy backing on her shoulders.  “Are we there yet?” Phil asked.

“Nearly,” Maddie answered, between breaths and a wipe of her brow.

“To what?” Phil demanded.

Maddie gave his hand a tug.  “Just a little further, I promise.”   Phil sighed, trainers stumbling on the parched grass.  “Okay up front?”

“Yep,” Helen said, glancing briefly at Maddie.  “This is right, isn’t it?” she asked.

“Think so,” Maddie answered.  “No way we could’ve stayed, anyway.  Not after Tess and Dan.”

“Point,” she conceded.  They were several miles from the village, yet it loomed behind them, in the dip of the valley.  Maddie wanted it gone, though that wouldn’t rid her of the memory of makeshift wooden markers driven into arid mud.  She sighed again.  “Still wish we’d cottoned on sooner. Might have brought a couple more with.”

“No way to know,” Helen said, “without being psychic.”

Maddie gave her The Look.

“It just bugs me,” Maddie said.  “Having so little to go on.  It’s not like there’s a clear thread through it.  Wish there was.”

“Don’t we all,” Helen responded.  “We’re here, though.  Let’s work with that.  Time to crack on.”  She hefted her rucksack, shifting it into position across her shoulders.  “Ready?”

Maddie nodded, trying to clear her head of the missing.  She hated that it was kids; that she saw them slip through the cracks, at night.  Never a trace by morning; just gone.  Prayed that she was right to take them away, to seek to escape it.  Couldn’t quite dismiss the image of the flower bedecked crosses atop the lofty hills.  She could recall how many there had been.

Another "Angry Hourglass" entry.  This came second!
Posted by C Connolly at 11:14