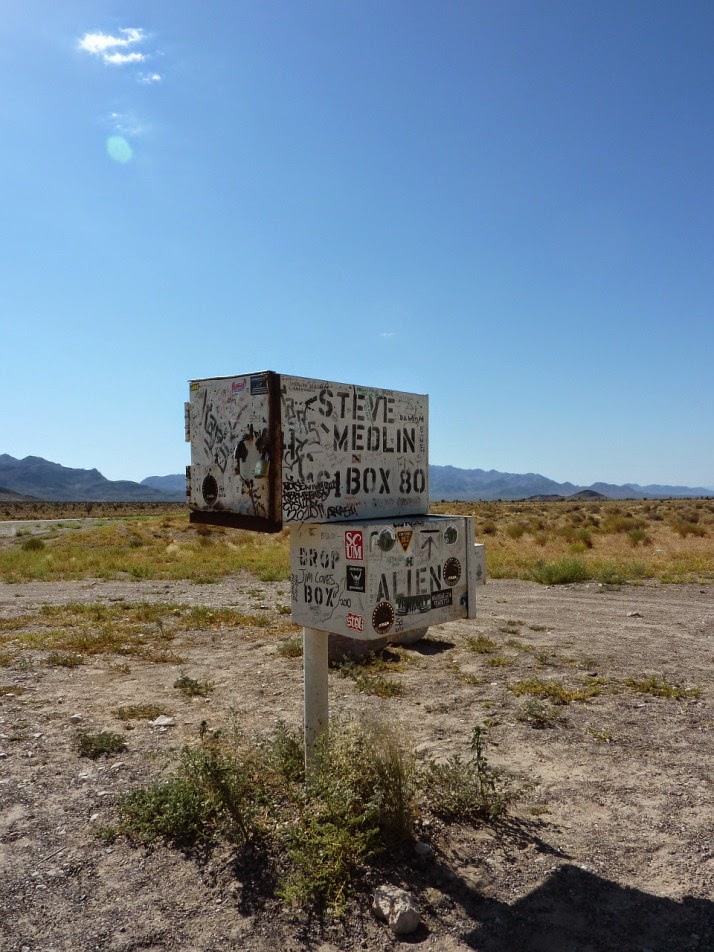 
It has taken the Red Planeteers light years to reach the quarter-inch thick bulletproof metal box on its chipped pole – Black Mailbox 80, owner Steve Medlin, with its Master Lock and contradictions.  For a start it’s faded white; for another thing, it’s not used by Medlin, nor anyone else the hundreds who camp around and converge upon it and the Extraterrestrial Highway have ever seen.  The signs towards Rachel with their question marks are there for those in the know, though any activity takes place when they’re not looking.  Suggested sightings are delusional; sometimes placed to mislead and misdirect – misinformation at its best.

They often wish there was a more convenient drop box – somewhere around Deimos or Phobos, as opposed to Route 375.  It would be a sight easier – and cheaper - to sort interplanetary tax liabilities.  Still, if Area 51 showed on planetary positioning systems, perhaps the payment wouldn’t be perennially late.  They always take a wrong turn somehow.

It's been a little bit since a piece for Flash! Friday featured here.  This is my latest, requiring inclusion of unpaid bill as part of the prompt.  Went slightly tongue in cheek this week, which makes a change from the darker stuff which recent photo prompts generally seem to have been resulting in.  Loads of great entries over at the site for those who care to take a look!