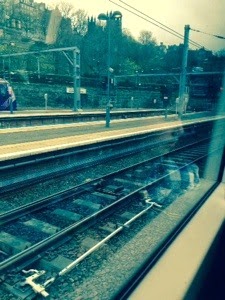 Peyton catches sight of her; watching, from the other side of the glass.  Her image sister; features familiar, even in reversal.  They smile at each other – a welcome and greeting.  She is gone by the time she reaches her destination; glimpse and gone.  Still, they have seen one another now.  Introduced themselves.

Peyton spots her again the next day – following, tracking, as she walks the pavement in the sun, alongside the series of shop windows.  They keep pace with one another.  Peyton cannot resist a casual wave.  Sees the hand raised to her right in reflection.

She is there now, wherever Peyton looks.  Unsurprising, given she cannot resist looking, now she knows she is there.  Her second shadow.

Peyton thinks she imagines it as the days pass but finds herself pondering whether the outline is more distinct as it travels with her, across mirror, water, glass; shining surface.  The expression stays with her, though she seeks to leave it behind.  Eyes watching, ever.  They follow her movements.  She wants to shut them out.  Impossible.

They face each other instead, the silica partition the only divide between them.  Peyton knows now where this leads.  The double feature pupils, left where right should be, tell her so.  They are without compassion; compelling her to understand they are competitors now.  Pretence of friendship abandoned.

She wants to win.  She wants to cross over.  To trade off.  To perform the switch.  The problem being, Peyton doesn’t know how to stop her.  To do that, she has to stop seeing.  Stop looking.  Into the face of the reflection which has no intention of abandoning her.  Peyton wonders how long she will last.

Another flash fiction piece for the "Horror-Bites" challenge.