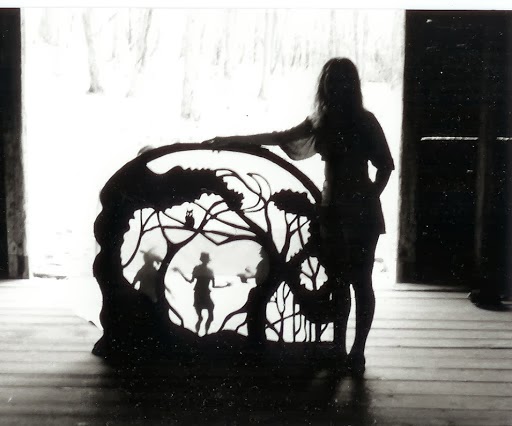 
Emma could see them if she concentrated, from the corner of her eye.  Yet when she turned, they weren’t there.  She grew used to them as a child – her shadow friends, somewhat seen and never heard.  Learned not to look, to capture them at the edge of her vision.  Her mother laughed when she told her – said she would grow out of it.  In time.  Instead, they grew with her, lengthening as Emma gained height.  Smoke edged blur became darker pitch.  They moved when she took her eye from them, otherwise placid two dimensional.  Innocuous.

There were three of them, not always en masse.  Sometimes singular, sometimes plural.  There seemed no rhyme or reason.  Emma tried to talk of them.  Received blank looks, was told “no lets pretend”.  They were there.  She knew.  They knew too.  Their secret now.  Silent.  Together.  Forever.

She had tried to tell her.