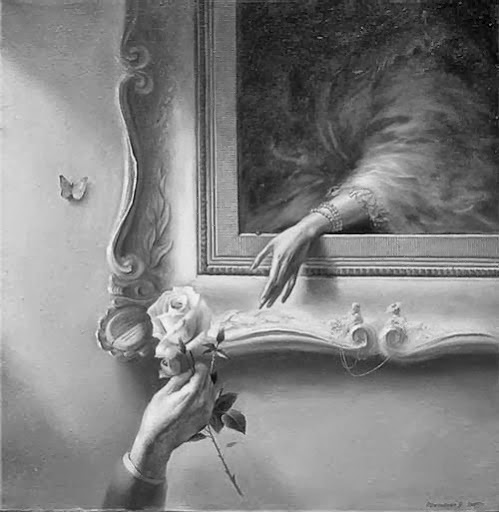 Jo had laughed when he told her at first, what he wanted.  It seemed so simple – before she understood what Dan was really asking.  He deemed it an honour – asking her permission to immortalise her in paint.  Had seemed slightly offended for it not to be taken more seriously.  She understood that better now.  Furnished with the knowledge of the intended eventual accomplishment.

It had seemed harmless, initially.  The sitting and posing.  Her thoughts wandered elsewhere, blatantly bored.  Brought back to herself, later, Jo saw it.  Could hardly avoid it, on sight of her reflection.  The leeching of colour from hair and eye.  Pupils surrounded by smoke grey.  Lack of pigment in follicles.  Both now captured on canvas, forever pristine.

She broke it off, then and there.  Walked away.  Resolved to forget.  Knew it for the self-told lie it was, even then.  He could recall all he needed from memory.

The word prompt for this week was "devoted".  This is a slightly different spin on that to the usual!
Posted by C Connolly at 05:18